An article on getting started with macOS development with RubyMotion. It shows you how to initialize your first project and translate between Objective-C and RubyMotion.

This article is part of a series with the following topics (if there is no link provided the articles will be published at a future date):

Before we start with our first project you will need to download and install Rubymotion from here. The download is a zipped installer. Unzip it and double click to install. Also make sure that you have got the current version of XCode installed as described here. Lastly you will need to have a text editor installed on your computer. My personal choice is TextMate which you can download and use for free.

After installation is complete open the Terminal application. Let’s start by creating a new project:

Working with the terminal

When you are working with Rubymotion you will have to be familiar with the Terminal. If you are not, you will find lots of tutorials on the web to get you started:

Run our app for the first time

Before we analyze the project folder a little bit more, we are going to build and run the app for the first time:

This should give you some output on the command line and the our new app will show up with a menu bar and a window: 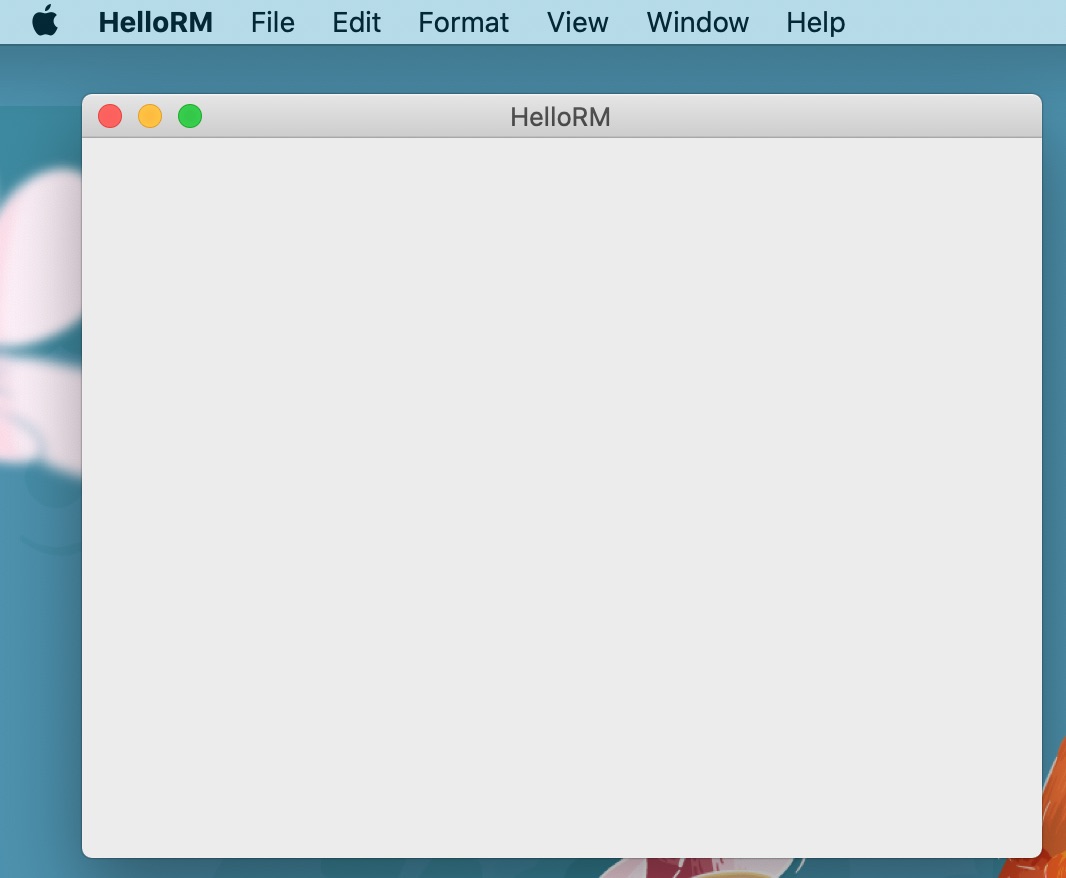 Hooray you have just built your first macOS application! Now let’s take a closer look at our project folder…

Let’s quickly have a look at these files and folders:

Considering the default structure of a Rubymotion project, I would like to suggest three simple rules you should follow:

Well rule 4 is a bonus rule, because this is already a quite advanced topic. For the beginning the first three rules should be enough to remember. Let’s quickly discuss the rules:

So you see that Rubymotion takes care of quite many things automatically and it is really easy to get started with coding.

Translating between Objective-C/Swift and Rubymotion

In order to start building the GUI of our app we need to open the app/app_delegate.rb file:

If you are familiar with Ruby or any object-oriented language you will be able to see that we are defining a class called AppDelegate with the methods applicationDidFinishLaunching(notification) and buildWindow. The first method is like the entry point to our application. After the application did finish launching (well now you see where the name comes from) this method is called. Inside the function the methods buildMenu and buildWindow are called. We can see that the method buildWindow is defined below but where does buildMenucome from? Actually, buildMenu is defined in our file app/menu.rb and in order to not complicate things we will have a look at that later… when we will change the menu of our app.

Let’s focus on the buildWindowmethod for now and go through it step by step:

First our variable @mainWindow is initialized. As you might have guessed we are creating the applications main window here. We are calling the alloc method of the NSWindow class. This is actually the magic of Rubymotion: it gives you access to the macOS APIs through Ruby.

Secondly the property title of our @mainWindowobject is set and last the method @mainWindow.orderFrontRegardless is called on the object.

In the next step we are going to find out, what this code does.

To understand what is happening in the code given above we need to read the Apple developer documentation. Let’s search for the alloc method name and we will get the following results: 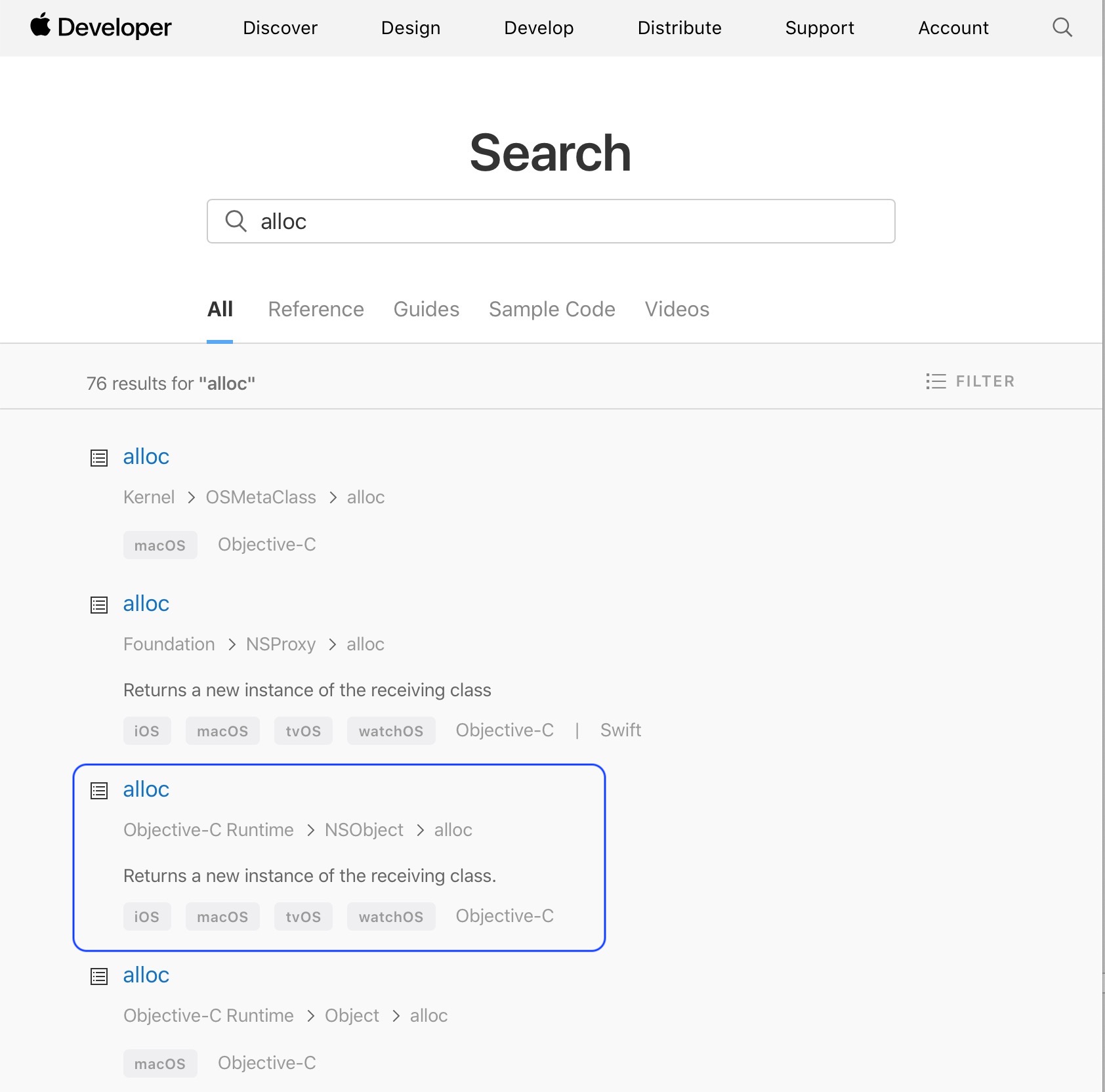 Let’s click on the Objective-C Runtime > NSObject > alloc method and we will get the description of what this method does: 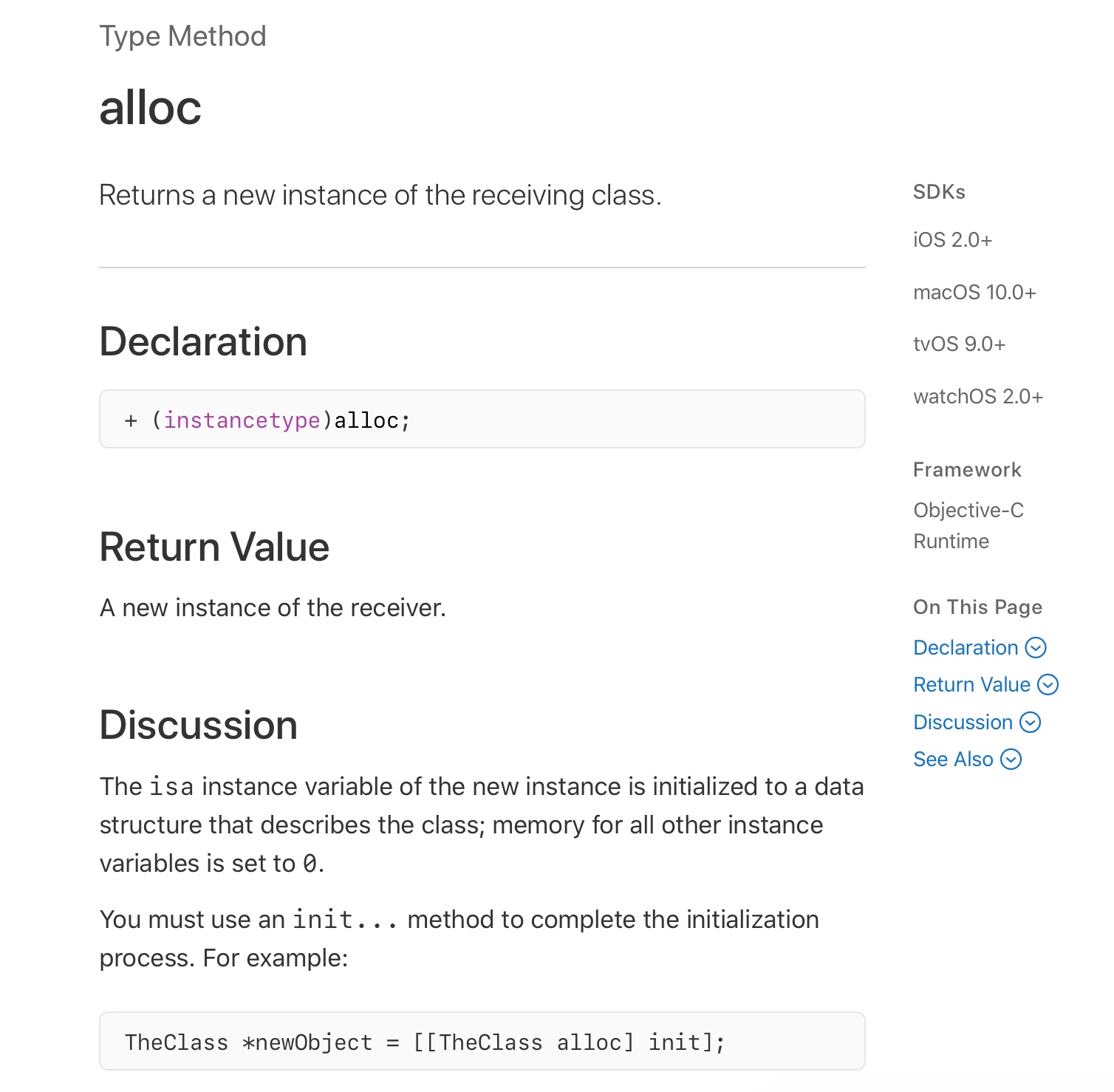 The documentation tells us that this method returns “A new instance of the receiver.” and “You must use an init… method to complete the initialization process. For example: TheClass *newObject = [[TheClass alloc] init];“.

Now this code example looks really strange, doesn’t it? Well that is because the example is written in Objective-C and not Ruby. This is really important: if you want to create macOS (and also iOS) apps in Rubymotion you must be able to understand Objective-C and/or Swift code, because you will need to translate the code examples from the documentation to Rubymotion code.

Switching languages in the documentation

To change between Objective-C and Swift in the documentation click on the disclosure triangle at the top of the page and then select your Objective-C as the language to display. For technical reasons the Objective-C examples will work better for translating to Rubymotion.

Objective-C method calls are written using square brackets. [TheClass alloc] means “call the alloc method of the TheClass class”. In Ruby we use dots for calling methods, like this: TheClass.alloc.

Method calls in Objective-C can be nested, like in the example from the developer documentation: [[TheClass alloc] init], which means “call the alloc method and then call the init method on the value returned by alloc”. In Ruby we nest method calls by adding a dot behind the first method call. So our example translates to: TheClass.alloc.init

Last, let’s have a look at assigning values to variables. In the original example this is done by writing TheClass *newObject = [[TheClass alloc] init];, meaning “the variable newObject is an instance of TheClass and let its value be the return value of [[TheClass alloc] init]”. As Objective-C is a statically typed language you must state which kind of value the variable has. Ruby, however, is a dynamically typed language, meaning that we do not need to specify the type of a variable. Also variables can change their types. Thus our translation to Rubymotion looks much cleaner than Objective-C: new_object = TheClass.alloc.init

Let’s look again at the documentation for the alloc method: “A new instance of the receiver.” and “You must use an init… method to complete the initialization process. For example: TheClass *newObject = [[TheClass alloc] init];“.

This is important to remember: when we are creating instances of NSObject subclasses we must usually call the alloc method followed by an init method. In our code from the default project the init method we are using is initWithContentRect of the NSWindow class.

Search Apple’s documentation for the initWithContentRect method of the NSWindow class and read its description.

Answer
You should have arrived here

Let’s look at the documentation for the initWithContentRect method once again:

Let’s try to understand the meaning of this code:

So we see that Objective-C uses named arguments in its method definitions. The problem is, that by default standard Ruby does not use named arguments. So the inventors of Rubymotion found the following workaround:

Calling the method this way in Rubymotion has the same effect as the Objective-C code above. Isn’t the Rubymotion code much easier to read?

Convert the following code examples from Objective-C into Rubymotion.

Here is what you should have come up with:

An app for translating Objective-C to Rubymotion

Ben Sheldon created and published a Heroku app to translate Objective-C into Rubymotion: Just go here to test it: http://objc2rubymotion.herokuapp.com

So here is what you have done in this chapter:

In the next chapter we will start creating our first basic GUI.

If you liked the tutorial or have any questions on it contact me via mail or also join the Rubymotion slack channel here: https://motioneers.herokuapp.com. Also check out my apps Docxtor and Gapped. Both were built using Rubymotion.